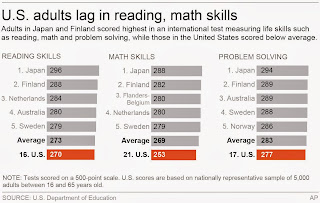 Why Tough Teachers Get Good Results


Click here to see the entire article
I had a teacher once who called his students "idiots" when they screwed up. He was our orchestra conductor, a fierce Ukrainian immigrant named Jerry Kupchynsky, and when someone played out of tune, he would stop the entire group to yell, "Who eez deaf in first violins!?" He made us rehearse until our fingers almost bled. He corrected our wayward hands and arms by poking at us with a pencil.
Today, he'd be fired. But when he died a few years ago, he was celebrated: Forty years' worth of former students and colleagues flew back to my New Jersey hometown from every corner of the country, old instruments in tow, to play a concert in his memory. I was among them, toting my long-neglected viola. When the curtain rose on our concert that day, we had formed a symphony orchestra the size of the New York Philharmonic.

Mr. K began teaching at East Brunswick High School when it opened in 1958.
I was stunned by the outpouring for the gruff old teacher we knew as Mr. K. But I was equally struck by the success of his former students. Some were musicians, but most had distinguished themselves in other fields, like law, academia and medicine. Research tells us that there is a positive correlation between music education and academic achievement. But that alone didn't explain the belated surge of gratitude for a teacher who basically tortured us through adolescence.


We're in the midst of a national wave of self-recrimination over the U.S. education system. Every day there is hand-wringing over our students falling behind the rest of the world. Fifteen-year-olds in the U.S. trail students in 12 other nations in science and 17 in math, bested by their counterparts not just in Asia but in Finland, Estonia and the Netherlands, too. An entire industry of books and consultants has grown up that capitalizes on our collective fear that American education is inadequate and asks what American educators are doing wrong.
I would ask a different question. What did Mr. K do right? What can we learn from a teacher whose methods fly in the face of everything we think we know about education today, but who was undeniably effective?

Luci Gutiérrez
As it turns out, quite a lot. Comparing Mr. K's methods with the latest findings in fields from music to math to medicine leads to a single, startling conclusion: It's time to revive old-fashioned education. Not just traditional but old-fashioned in the sense that so many of us knew as kids, withstrict discipline and unyielding demands. Because here's the thing: It works.
Now I'm not calling for abuse; I'd be the first to complain if a teacher called my kids names. But the latest evidence backs up my modest proposal. Studies have now shown, among other things, the benefits of moderate childhood stress; how praise kills kids' self-esteem; and why grit is a better predictor of success than SAT scores.
Posted by Mr. Haymore at 3:52 AM No comments:

The overall SAT scores for students have dropped significantly in the last six years (AP)
The annual SAT scores have been released to the public and show a continued decline in math and writing scores.
Even worse, as CBS’s Money Watch reports, more than half of incoming college freshmen are not ready for the academic challenges of college.
"We must dramatically increase the number of students in K-12 who are prepared for college and careers," College Board President David Coleman said in a statement. "Only by transforming the daily work that students do can we achieve excellence and equity."
In the data released by the College Board, a full 57 percent of graduating seniors aren't ready to transition to college coursework, based on SAT results.
The average student performed better on the math portion of the test, scoring 514 out of a possible 800. On the reading comprehension portion, the average student scored 496. Students fared worst on the writing portion of the test, averaging 488.
Technically, the 2013 results are identical to those released in 2012. However, the College Board said the numbers represent a measurable 20-point decline since 2006, when the writing portion of the SATs was first introduced.
“While some might see stagnant scores as no news, we at the College Board consider it a call to action," Coleman said.
Still, there were some positive changes in this year’s data. For example, the number of minority students taking part in the SATs has increased significantly over five years ago: 46 percent of all SAT takers in 2013 were minorities. And among those minorities, African-Americans and Hispanic test takers both saw improved test scores from 2006.
However, the 1498 average total score for all test takers fell short of the 1550 SAT College and Career benchmark, which says students who score at or above that level have a 65 percent chance of earning a B- average.
Interestingly, the College Board also compared the average SAT scores for students based on which degree tracks they were planning to pursue.
Those students planning to study the physical sciences rounded out the top, averaging a score of 1,673 on their SATs. The most popular degree tracks — education (1442), psychology (1484) and business management and marketing (1661) fell further down the scale, though not as far as students planning to study construction or hoping to pursue careers in parks and recreation.
According to the College Board, the students who fare best on their SATs have completed a core set of coursework in high school, have taken AP or honors courses, and fell into the top 10 percent among their classmates in overall GPA.
The College Board, which helps students prepare for the SAT and other college course tests, has recommended a number of changes to improve scores, including providing more rigorous coursework for students.
Posted by Mr. Haymore at 3:47 AM No comments: 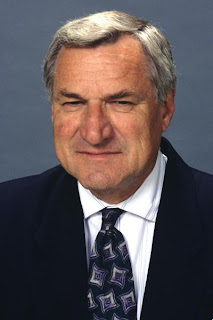 The following article was written by John Drescher — Executive Editor of the Raleigh News and Observer.

Dean Smith had a keen intellect. That, Jacobs said, “is part of why people who played for him and worked for him are reverential (toward him). There was this incredibly active intellect and he had decided to do basketball. You recognize when you are in the presence of an exceptional mind.”
Guthridge said: “His mind was unbelievable. He could remember everybody’s name, every situation. It was amazing what he could remember. It was a great gift.”
Smith retired in 1997 with more wins at that time than any coach in men’s Division I basketball history. He was a creative leader always looking for new ideas. He was alert to the world – the basketball world and the real world.


Jeff Bzdelik, the men’s basketball coach at Wake Forest University, said recently he doesn’t read newspapers or websites.
In three years at Wake, Bzdelik has won 34 games and lost 60. This year, Wake won six of 18 games in league play, finishing ninth in the 12-team Atlantic Coast Conference. A group of fans recently purchased ads in the Greensboro News & Record calling for his firing.
“I don’t read the newspapers or the Internet, and that’s the truth,” Bzdelik said last week.
Bzdelik’s comments prompted me to think of former UNC coach Dean Smith, who liked to read. I wanted to ask Bzdelik why he didn’t read newspapers or online sites; how he kept up with current events; and what he did read.
He declined to be interviewed but a spokesman, Scott Wortman, said Bzdelik keeps up with current events by reading newspapers and watching the news. “But he doesn’t follow sports in the media, be it newspapers or the Internet,” Wortman wrote in an email. “Reading that stuff might cloud his judgment when interacting with the media, so he just stays away from it all. He’s more focused on coaching his team and letting me, as his SID (sports information director), keep up with the media coverage.”
Fair enough. Smith, on the other hand, read what was written about him and his program. When The News & Observer’s A.J. Carr received an award in 2008, Smith told me: “He’s very thorough. It always came out right. I had a lot of confidence in him.”

Rick Brewer, the sports information director at UNC from 1975 to 1999, told me Smith had numerous newspapers delivered to his office. He called Smith “probably the smartest person I’ve ever met. He did read extensively. ... Because he had such various interests, especially on social issues, I know he read the newspapers.”
Serious reading
When it came to books, Smith read almost exclusively about philosophy and religion. His long-time assistant, Bill Guthridge, said Smith liked to relax by reading from midnight until 2 a.m. Guthridge was an early riser; Smith a night owl. “We joked with each other: We had the 24 hours locked up,” Guthridge said last week.
In his 1999 autobiography, “A Coach’s Life,” Smith wrote, “It was a habit of mine to do some reading late at night in my study after watching film. I would leaf through serious volumes.”
Smith read the work of American theologian Robert McAfee Brown, who put together the Laymen’s Theological Library. “This library introduced me to theologians and philosophers such as Barth, Bultman, Buber, Bonhoeffer and Kierkegaard,” Smith wrote. “I guess I was searching for the meaning of life through these authors, and still am.”
Kierkegaard, the Danish philosopher, made a big impression on Smith; the retired coach mentioned him five times in his book. Smith wrote, “Certainly, Søren Kierkegaard has been most interesting to me.”
Smith was interested in public affairs and thought often of the society in which he lived. He supported integration in Chapel Hill in the 1960s and signed Charles Scott in 1966 as the first black scholarship athlete at UNC. Scott became a star player when many southern teams were still all white.
‘An exceptional mind’
Barry Jacobs has covered ACC basketball since 1976 and writes for several websites. He’s also chairman of the Orange County commissioners and served previously on other local government boards. Smith knew of Jacobs’ interest in public affairs and would initiate conversations with Jacobs about politics. “He was just a well-informed person,” Jacobs said. “You can’t be that on top of things if you are not reading.”
Smith had a keen intellect. That, Jacobs said, “is part of why people who played for him and worked for him are reverential (toward him). There was this incredibly active intellect and he had decided to do basketball. You recognize when you are in the presence of an exceptional mind.”
Guthridge said: “His mind was unbelievable. He could remember everybody’s name, every situation. It was amazing what he could remember. It was a great gift.”
Sadly, Smith’s mind is no longer strong. But for most of his 82 years, he was a deep and clear thinker, and reading about basketball, politics and faith was an important part of who he was. 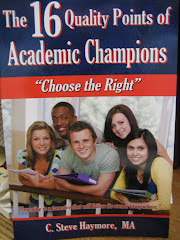